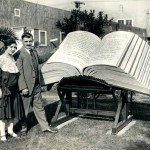 Last week, a Facebook friend posted a photo of a man thumbing through what had to be the largest book I’d ever seen, the title of which was A MANUAL ON WOMEN. Pretty funny, actually – but on second glance, I thought c’mon! A manual about women wouldn’t really be THAT long, would it? I mean, if I ever were to pen such a guide, I’d keep things pretty brief and start with the basics: never use the words BIG and ASS in the same sentence, always offer wine when in doubt, telling us to calm down will only make things exponentially worse, look at us when we’re fucking talking to you, and pick up your damned dirty undies. Helpful tidbits like that. I’d then follow up with some remaining guidelines to finish off the list. Just the important stuff, for the sake of brevity. Which, I now realize, would require about 35,076 more pages.

Wow. Women are high-maintenance pains in the ass.

(By the way, if you’re a man and not enthusiastically bobbing your in agreement with that last sentence, it’s only because your girlfriend/wife is reading this aloud to you and watching carefully for your response – and you’ve just realized there’s no more wine in the house. And if you’re a woman and shocked/disgusted/loading your gun while Googling my street address because of that last sentence, you’re in full-blown denial, sweetheart. So c’mon over. Bring cake and I’ll get out the vodka…)

A manual about men, then… What might that look like? A single-page sheet, I’m guessing. Filling not even the whole damned page.

Because men are easy.
As in delightfully simple.
And I mean that in a good way.

Women have more intricate plumbing. We make 47 million more decisions every day. We hold more body water (probably because of that plumbing thing). We are the nurturing gender. Don’t ask me why we’re more complicated. I am entirely uninterested in that debate. We simply just are.

Yes, this is merely my opinion. Yes, it may sound like I am being unfair to my own sex. Yes, I am speaking in generalizations. But the bottom line is that it’s boatloads easier to figure out men than it is women.

For example, there are 14,762 rules for men to follow with women, of which 13,986 have several conditional exceptions.

With men, women have only about ten rules to follow. TEN. And most of the time, we fuck them up.

In defense of my own gender, I’ll assume that it’s because we are either often forgetting those ten simple rules, or haven’t yet learned them. So in offer of support, here they are.

1. Men are not clairvoyant. Stop saying he should know why I’m mad. Unless you communicated it directly to the poor bastard, he probably doesn’t know.  So lay off the whining and stop blaming him for not being able to read your mind and. Use. Your. Words.

2. Men detest setup questions. Who can blame them? Asking don’t you think she’s attractive? or does this make me look fat? is just plain mean, because there’s no perfect answer to these questions. Lay off the pop quiz and stop being such a bitch. And while we’re on the subject of questions…

3. Men will (mostly) tell it like it is. So don’t ask questions unless you really want the answers. Asking whether you’ve gained weight since you first met him while knowing full well about the three dress sizes you’ve blown right through and that you couldn’t fit back in that wedding dress if you didn’t eat for eight months – and then screaming in rage when he provides an honest reply is stupid. Not to mention your own damned fault.

4. Men will know other women. They are also going to be around other women, talk with them, get calls and emails from them, work with them and be friends with them. They will also have dated other women and even had sex with some of them before you came along. Get the fuck over it! Grow some self confidence and stop drilling him about everyone he knows who urinates sitting down.  If, after you’ve gotten a grip on your neuroses, you think he may be cheating, ASK (refer to rule 1).

5. Men want sex. Far more often than women do. Sure you’re tired from your long day of fill-in-the-blank, but just bite the bullet and give it the old college try.  Besides, lots of studies show that couples who have frequent sex are healthier, so here’s to less whole wheat more of HIM.

6. Men don’t want to watch the Hallmark Channel.  And while they may begrudgingly tag along, most men would rather eat glass than sit with you through the latest chick flick. They also would rather have pins stuck down their fingernails than help you shoe shop, dress shop, or shop for anything that can’t be purchased at either a Best Buy or Home Depot. So have a heart and leave him to his own version of fun while you enjoy a Girl’s Night Out.

7. Men don’t care about your shoes.  It’s a rare man who actually takes any interest in whether the white dress and pearls would be more appropriate than the mauve pantsuit for Aunt Myra’s birthday dinner. He cares about YOU, not your outfit. And stop getting mad at him about this, because it’s a good thing.

8. Men don’t give a shit about calendars. If he never sent his Mom a Birthday card before you came along, it’s no biggie. Chances are good that he got along fine for years without you serving as his walking calendar. So call his Mom yourself if you want to, but stop nagging him to do it.

9. Men don’t remember details. Ask if he recalls the dress you wore to a wedding that took place two years ago, or a friend you introduced him to eight months before, and it’s likely he’ll say no. He’s not saying that to piss you off: men really don’t remember much. They don’t have instant recall for past events or conversations as women do, simple as that.  So just let it go.

10. Men won’t tell you everything. If he informs you that he once dated the woman you just ran into at the mall about seven years back for 45 seconds, don’t get all you-never-told-me! on him. He probably won’t tell you everything, mostly because he doesn’t consider it that big a deal. And he shouldn’t have to tell you every stinking thing – even if you have. Men are not wired to communicate with the depth women often do, and frankly prefer not to spill every dirty detail unless it’s relevant to the moment. So don’t prod or demand: just ask respectfully. (And remember rule 4, please…).

This post ©2014 ORANGESWING.COM AND SUSIE RILEY.
ALL RIGHTS RESERVED.