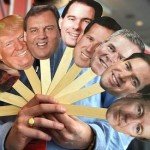 These days, the Presidential Race reminds me of a clown car: just when you think there couldn’t possibly be any more candidates, out pop a few more. Which is good, I suppose, since a wide field presents lots of options… But the debates feel more like popularity contests and publicity feeding frenzies, with substantially more pointing and shouting than solid, helpful responses. So how do ya weed out the viable candidates from the nutbags? How could we possibly get meaningful information from each of them that will aid our decision to select the next President of this country?

Why not a test?

In this country, we test everyone: job seekers, citizens, beauty queens, college applicants… why not a test to help determine who might be a more qualified President?

Personally, I’d propose a combination of questions from the following:

Scoring for only-one-correct-response questions would be conducted by a nonpartisan team previously selected and approved by all political parties – and all responses, along with this score, would be presented on a website for public consumption.

What would the test look like? Here’s a peek at my take…
(Fair warning: there are a few trick questions in here.)

NOTE: all responses must be presented in 20 words or less.