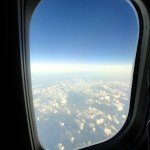 I have, thankfully, never flown often enough to consider it a mundane experience. As a result, I love nearly everything about being on a plane. Packing… waiting at the airport… take-offs and landings… Mostly, I love looking out the window. Even when it’s too foggy to see past the wing or too dark to see the wing itself, I’m a kid, all giddy with my face constantly pressed close against the pane for the best possible look. Inevitably, excitement will overcome me and I’ll turn to my seatmate and say something very six-year-old sounding like HOLY CRAP! HEY, LOOK AT THIS! DON’T YOU WANNA PEEK?  And – even when that person is my very own husband – the seatmate will inevitably respond with a slow shake of their head, all the while gazing at me as though I deserve a time out or require medication…

I always wonder why they look at me like that.
Why aren’t THEY just as excited?
How can you actually grow tired of flying through the fucking air??
How can you NOT want to look out the window?????

Anyhow, not too long ago while flying I heard a pilot announce, ‘folks, we’re passing over Detroit and cruising at an altitude of thirty thousand or so feet…’

It suddenly hit me:
Sometimes things just look far, far better when you don’t take too close a look.
Especially when the view you already have will suffice.

This thought awed me. It stayed with me for quite a while… but apparently not long enough, because the other day I heard myself in a conversation that went [something] like this:

‘Sure… But have you seen/heard/read that thing about him/her and that/them?’

‘NO! What about him/her and that/them?’

‘They did that thing with/without them/him/her, and now he/she is really upset, so they said/did/wrote something ahout him/her/them.’

‘I KNOW! Yesterday/last week/this morning, I heard/read/tweeted that he/she will not/will say/do that with him/her/them again.’

‘WOW! And there’s that thing/fight/breakup with him/her/them over that thing/person/event.’

‘Bummer! And here I thought he/she was so nice…’

When I started listening to myself, I felt awful.

I should have left things at he/she is really nice, isn’t he/she?
But I flew in lower for a closer look.
And it did no one (least of all, me) any good at all.

I need to just be okay with things and stop looking too closely when it’s not necessary.

I have to learn to stay at thirty thousand (or so) feet when the view is good enough from there… no need for a more detailed peek when that’s already plenty.

From here on, I’m giving this my best shot.
But I’m still going to be utterly excited about the window seat, no matter how people look at me…

This post ©2014 ORANGESWING.COM AND SUSIE RILEY.
ALL RIGHTS RESERVED.