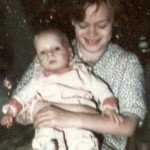 She was born on a fall day in 1969.  My father interrupted our school day to bring us the news.  ‘It’s a girl,’ he said, smiling down at us.  I have no recollection of my mother being pregnant, but I know I wasn’t surprised by this announcement… we must have been expecting this new little sister.

But no one was expecting Donna.

Having arrived a few months premature, she weighed barely three pounds. A hat my grandmother made for Donna snugly fit my mother’s closed fist.  I remember that fist, the symbolic gesture of it, tightly clenched and held upright, donning my sister’s tiny yellow bonnet. That fist embodied my mother’s conviction, her firm belief, her deepest prayer that Donna would be fine.  But Donna was born with a series of physical problems that were entirely separate of her prematurity. Only the autopsy report, prepared a few years later, would reveal the full breadth of her struggle.

Donna did not leave the hospital in which she was born for nearly three months. Only my parents were permitted to see her, leaving us to ache for the chance to visit.  So when she was transferred to another hospital, my parents rejected the offer of an ambulance and transported her themselves, making sure the route would include a brief stop at our home. That’s where we finally met, on the curb in front of our house, through the closed window of my father’s car. How thrilled we were, my siblings and I!  How we longed to touch and kiss her, but were prevented from doing so. This introduction lasted only a few minutes, all of us vying for the best view and waving through that car window until our arms ached. Then off they went to the hospital for another lengthy stay.

A few weeks later, we visited Donna for the first time.  While my mother held her, the four of us crouched before her on the floor, touching her little fingers, cooing to her, marveling at her tinyness. Her skin was pale and translucent, her body gaunt and fragile. She looked down at each of us thoughtfully, as if to acknowledge our presence, but nothing on her sickly little face reciprocated the excitement we felt: her expression was void of any smile or response we were seeking.  Initially, this did not diminish the joy of seeing Donna, but when we left the hospital, I wondered why… why she was not coming home with us, why she did not look like other babies, why she was so very thin and small, why she did not seem happy.  Lots of why’s.

Much of these why’s waned when, weeks later, Donna finally came home to live with us. Over time, the initial thrill of her long-awaited presence in our house was soon replaced by the everyday-ness of things.  But all too many times over the next few years, each of our lives were placed on pause while Donna’s life literally paused, and then thankfully restarted.  We took on a strange cycle that moved between that of a normal family, and that of epileptic seizures and frenzied trips to emergency rooms.  Donna spent nearly half – if not more – of her brief life in hospitals.  My siblings and I spent far more time in waiting rooms than most adults ever would.  But in the less critical moments when our focus was not on Donna and she was well, each of us – individually and as a family – hold happy memories of these years.

I remain somewhat ashamed that, during this time, much of what I remember feeling is frustration at being inconvenienced by these trips to the emergency room to wait endlessly until Donna was in the clear.  I also recall being immensely relieved that we couldn’t visit her while she remained at the hospital.  I never truly grasped the gravity of these episodes and the frailty of Donna’s life until one afternoon when, during a typical vigil in the waiting room, I privately witnessed my father crying. His head was bent over low almost to his knees, and I watched him for several minutes until a solitary tear fell from his hidden face onto the floor below him. This remains one of the most powerful memories I have.  I felt frightened for Donna – and all of us – only then.  But my fear dissipated when she returned home.

That Donna did return home made these episodes no less chaotic, but definitely more bearable.  Because we – my siblings and I – didn’t understand what was really happening, it seemed sensible to assume that each trip to an emergency room meant a few hours of boredom and the subsequent absence of Donna for a few days.  It became routine.  And it never occurred to me that, one day, she would not come home.

One May 19 morning, Donna was in the midst of a typical stay at the hospital when the phone rang.  My mother spoke briefly, began crying, and handed the phone to my father. He listened, thanked the person for calling and hung up, then brought all of us into the living room. “That was the hospital,” he quietly said.  “Donna just died.”

At first, I felt completely astonished, as though I’d been kicked in the gut – and a quick glance from my older sister told me she felt the same. But the raw pain instantly followed, and we quickly formed a huddle for an agonizing cry.  At that moment, it was a shared grief…  a shared, devastating loss. I don’t believe my family had ever before or will ever again feel so intimately connected as that morning.  Donna was not coming home.  Even this many years later, I have felt no other pain that compares.

I was seven when my sweet little sister was born and ten when she died. The grief still occasionally seeps from within me, the clarity of my memories sometimes unexpectedly assaulting me. Young children do indeed mourn loss, this I know for certain.

I once resided down the street from where Donna was buried, 39 years ago this week.  Thoughts of her would always flood my mind whenever someone asked if I had family nearby.  Yes I do, I would say…