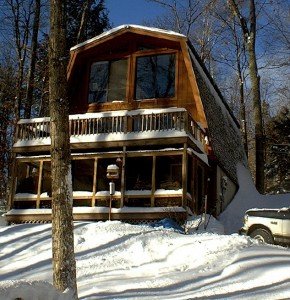 After dinner last night, I sat down and devoured Rebecca Rule’s Live Free and Eat Pie, a light-hearted read about visiting and living in New Hampshire.  I adore Rebecca’s yankee humor and talent for weaving a terrific tale.  Her delightful stories reminded me of our first months in New Hampshire, back nine years ago.  Having such love for this area of New England, it was a dream come true to be moving up from Massachusetts.  It still is, but there were a few potholes and frost heaves along the way during that virgin year.  Here’s a brief synopsis…

MID DECEMBER: “What kind of dog would have made this?” I ask the house inspector as I point to a gigundous paw-print on the front door of our soon-to-be home.  Already knowing the answer, Rick cringes when the inspector cheerfully responds, “That’s no dawg; that’s a beah paw.”  Bear.  At the freaking front door of my new house.

EARLY JANUARY: One week before closing, the insurance company instructs me to check with the town for the location of the nearest fire hydrant.  When I phone them, they report that it’s 14.5 miles away, in the next town. Huh. I make a mental note to buy a long hose.

MID JANUARY:  Closing day is sunny and nearly 50 degrees.  Serendipity!  Numb with writer’s cramp from signing all those damned forms, we excitedly dash toward the car when it suddenly occurs to us that we never received a house key. “Keys…,” the prior owner replies, cocking his head. “I don’t know where they’d be. We never used them.” I wonder if bears know how to open front doors.

LATE JANUARY: Settling in.  Mountain views from the front windows are magical. Bliss!  But the grocery store is more than 20 minutes away.  The good news: beer, bait or ammunition is only five minutes away.  So I don’t need to stock up on Guinness or shiners, only milk and tampons…

EARLY FEBRUARY: Rick flies off for a business trip.  I visit the library and quiz the locals about the paw marks on my front door.  One elderly gent thoughtfully responds, “well, you need to mahk the prawpuhtee.” I stare back at him, asking how a flag would do any good. He repeats his suggestion. I inquire about paint and whether he means bears don’t like certain colors.  Frustrated, he finally explains the concept.  Who knew… Rick returns home the following week and, none too pleased with my plan, begins a month-long process of heartily urinating on the outer perimeter of our house. Inside, our ant population quickly decreases.

MID FEBRUARY: I read an article in the local paper about a lovely, eighty-seven-year-old woman from our town who recently passed.  An angel who spent most of her life working with local charities.  Well known, much loved. Her parents moved here when she was just four weeks old, the article states. The next sentence begins, “although not a native…” Four weeks. What an absurd technicality.

LATE FEBRUARY: I discover the joys of shopping at the dump.  Used books, muffin tins, a wicker chair. Pay dirt! Alas, my enthusiasm for this new ritual frightens my urban friends, who are now convinced I’m rummaging through garbage like a bag lady. Until I show them. Now it’s the highlight of their visits.

EARLY MARCH: Town meeting.  The closest hand of government an average person can touch. People say that, up heah, town meeting is a spectator sport.  But wait: it’s March. People are suffering from cabin fever; they’re itching for an argument and anxious for hunting season.  Bad enough combination, but now they’re all going to be herded into one room for three hours, to hear details on how their taxes are going up.  Worse, they’re being fed a ham and bean suppah right before. I’m afraid… Most articles pass without bloodshed, but the last is about the town’s plan to switch out the streetlights with halogen bulbs, to save money. Suddenly the crowd perks up and people are queuing at the podium to have their say. The first speaker states that halogen bulbs emanate a hue that’s not visually pleasing.  The second speaker firmly believes there are already too many streetlights on her road and we should rethink the number of them before we discuss the bulbs being used.  The last speaker claims that streetlights aren’t even needed, since we all know where we’re going. At this point I hear, in the far corner of my brain, Paula Prentiss frantically screaming, “I don’t know about you, but I’m getting the hell out of Stepford!”

EARLY APRIL: Earthquake.  Really.  Epicenter located about 70 miles away in upper-state New York.  At seven in the morning, we hear a train accelerating toward the house… then realize there are no tracks for 35 miles around.  Suddenly our little house gently rocks from side to side quite a bit for about eight seconds.  First time our bed ended up in the middle of the room without our being in it.

MID APRIL: We discover a season never before experienced by us that’s built entirely around mud.  Overnight, our carefree dirt road morphs into an obstacle course that would pose a high degree of difficulty for an ATV.   What’s left is commonly referred to as a uni-rut, a ten-inch trench down the center of the road that, once it has you in its clench, will magically drive your car just like that middle rail on those old cars at Canobie Lake. The bad news: good luck finding your way out once you’ve reached your driveway.

LATE APRIL: Rick begins screening the downstairs pawch.  During which we discover another time of year we knew nothing of: black fly season.   In a delicious twist of irony, Rick installs screen whilst wearing screen (i.e., a bug jacket).

MID MAY: It snows five inches.  In freaking May.  The good news: it kills most of the black flies.

LATE MAY: I purchase shrubs to plant in front of the house. Excitement! I dig four inches down and hit a rock that, I discover a few hours later, is merely the tip of something the size of Manhattan.  Excrement! The good news: Home Depot didn’t argue when I returned the shrubs.

EARLY JUNE: Sun… warmth… summah!  I put away the winter coats, shave my legs and sit out on the newly screened pawch.  Beautiful green foliage has filled in the road view and we’re suddenly remote, invisible to everyone (damn: I didn’t need to shave my legs after all). Hummingbirds at the feeder, cold beer on the porch, the Sox winning… It’s glorious.  I love it here.  I am never leaving this place.

MID JUNE: Invasion. An army of mosquitoes has infested the state. The little buggers can’t get enough of me.  I buy every brand of repellent under the sun and still feel like an all-you-can-eat bug buffet.  Incapable of not scratching, I stock up on band-aids and beer, rationalizing that alcohol might prevent infection.

LATE JUNE: First power outage. Lasts three days, during which I grow surprisingly comfortable peeing in the yahd. Unfortunately, this habit leads to bug bites in naughty places.  Until then, no one had suggested hoarding a stash of water for priming the toilet.  Basstahds. The good news: lesson learned. Our inventory of water-filled milk-jugs are constant and would last us weeks.  No more mahking the prawpuhtee for me…