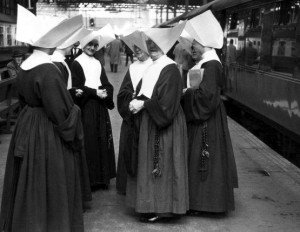 Whenever I watch an old movie with a train scene, I’m always on the lookout for a nun. Because the chances are good there’s at least one on that train. I often wonder why this was so. Could it be that nuns were not permitted to move about by plane? Did Amtrak provide discounts for clergy? And are scores of nuns still traveling the tracks, but only harder to spot without their habits?

Welcome to my world: this is some of the shit that keeps me up at night.

Gobs of other thoughts clog my brain.  While this hardly makes me unusual, these thoughts typically arrive in the quiet of the night, often jolting me from a delicious, sound sleep. And it really pisses me off, given how paltry and vacuous these fleeting thoughts are.

Why would anyone spend hundreds of dollars on a high colonic when a can of corn costs only 59 cents?

Doesn’t lumbago sound like something that’s ordered on rye bread with a side of cole slaw?

How come no one’s ever invented a self-cleaning toilet?

Isn’t it weird that the Baseball Hall of Fame displays the shoes of Shoeless Joe Jackson?

Why don’t we install LoJacks on our cell phones, car keys and everything else we tend to lose?

Who the hell is responsible for removing the word unlikely from the pre-flight sentence in the unlikely event of a water landing…?  Don’t they know we really needed that word in this sentence? (And do they really believe that calling it a water landing will make us feel better, for that matter?)

Why would anyone follow the guidelines on condom boxes that read for longer product life, store in refrigerator…?

Is it just me, or do others also think Oprah Winfrey is the antichrist?

How is it possible that I can’t recall a single children’s movie made by Disney in which both parents are alive or still married?

Why is it that the smaller an item of clothing is, the more money it costs?

Since the Lifetime Channel typically shows movies about women who murder or are themselves murdered, shouldn’t it be called the Killtime Channel?

Wouldn’t weddings be more fun if vows were written to sound like warranties? (This product sold as is, the manufacturer makes no representations regarding performance, etc…)

How is it that Hallmark never invented a You’re Welcome card?

Is it okay to admit I own a Glenn Campbell CD?

How can crime labs on TV tell everything about you from one stinking drop of blood, but the doctor needs twenty pints to figure out whether it’s just a common cold?

Why is it called rush hour when you can’t?

How can one product possibly cure both diarrhea and constipation?

Why are there never screens on windows in the movies or on television shows?

Shouldn’t we be happy that idiots are driving on the highways with us, instead of staying at home procreating?

Do they make plungers for brains?? Do you think I should take sleeping pills?