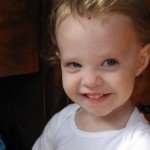 Today, I am helping spread the word about pediatric cancer, on behalf of my friend Sheila Quirke and in honor of her daughter, Donna Quirke Hornick.  This post is one of dozens placed throughout the web today to raise awareness as well as funds to fight this cruel beast.

Like lots of women, I color my hair.  It began when I was 19, to conceal a flat, mousy brown that rapidly changed to a scary gray in my late twenties. Over the past thirty years, I’ve had no more than a miniscule peek at that gray between an average of four treatments annually.  But lately, I’ve grown tired of hiding that gray… of being afraid of it. Tired of the expense. And, frankly, tired of my hair. I want a change so badly I can’t stand it.

So I’m going to give my gray a shot and see how it looks on me. But the thought of growing it out makes me stark-raving mad…  No, I have decided that the best way to give this gray a fair chance is to provide a clean slate. So next week, I am getting rid of my hair.

I can already hear y’all freaking out.  Hang on! – it’s only hair. It. Grows. Back. Besides, I’ve wanted to do this for a long time.  And since next week is my fiftieth birthday, I am giving myself this gift.

Now, for a few reasons (the first being I’m a coward and the second being it’s freaking WINTER up here), I won’t be doing a Full-Monty head shave.  My clean slate will go only so far as a hoo-rah, Marine-recruit buzz cut. But if it were Summer and I were brave enough to embrace going bald, I would do it in a heartbeat.

Who’s Donna?  And what’s hair got to do with it?

See that exquisite, gorgeous face at the top of this post? That’s Donna Lubell Quirke Hornick, who was diagnosed with an aggressive brain tumor at twenty months old. Despite an early prognosis of two to three months, Donna thrived for ten times that, living joyfully and gracefully until October 2009 when, after 31 months of treatment, she died peacefully at home surrounded by her loving and heartbroken parents.

Donna’s mom, Sheila, wrote indelibly on my heart when she wrote Donna’s amazing story.  That she could marinate this story in such joy, grace and hope overwhelmed me in ways I cannot possibly describe. Her strength awes me. As does Donna’s Good Things, the nonprofit she and her husband, Jeremy, started to inspire good works that Donna inspires.

Next month, Donna’s Good Things is hosting a St. Baldrick’s event to raise money to fund research in hopes that one day no child will have to fight cancer. The St. Baldrick’s Foundation raises more funds for childhood cancer research grants than any organization except the U.S. government. These amazing folks coordinate head-shaving events, where volunteers collect pledge donations from their friends, colleagues and family to go bald and stand in solidarity with kids fighting cancer, while raising money to support life-saving childhood cancer research.

To date, 32 shavees have signed up to raise money for Donna’s Good Things on March 24th. And while I will not be one of them, I will be standing with them against pediatric cancer via a donation.

THAT is what hair has to do with it.

I am asking you, my yummy Orange Swing readers, to stand along with me through your donation. I am asking you to stand up against childhood cancer… and stand for hope. And courage and bravery and strength and life. Donate what you can, if you can, so that other children diagnosed with cancer do not die. Consider it a fiftieth birthday present to me, if you like. I’d really love that. And you.

P.S. If you have a few minutes, please go visit Donna’s Good Things on Facebook, to see all the other amazing posts that bloggers are writing about Donna.