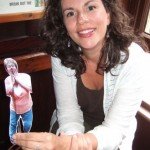 In a matter of days, I travel to New York City to visit my friend Elizabeth for the weekend.  Until the very moment she opens her door to me that Friday night, I’ll have never before laid eyes on her nor heard the sound of her voice.

Like many others, my definition of a friend has been dramatically altered by my foray into Facebook, morphing into something I’d never before considered: that it’s possible to become endeared to someone you don’t know.  At least by previous standards of what it is to know someone.  Even the act of establishing a friendship is entirely different, in the sense that the physical aspect is often nonexistent.  It’s a concept that’s fascinated me from the start.  And while I don’t feel so strongly about everyone I’ve friended, I’m delightfully surprised by how openly and easily I refer to some I only know online as a friend.  Truly, it’s the way I feel. Why, then, not take the next step and meet in the real world?

So Elizabeth and I are – for lack of any other way to put it – taking our friendship up a notch.  Making it official.  Consummating things, so to speak.

And we’re both very excited about it. You can tell by the number of exclamation points in our Facebook posts over the past few weeks.  Heck, she even bought a new sofa for me to sleep on while I’m staying with her and – I’m not kidding – is painting her living room. In my favorite colors. (Okay, that last bit is pure coincidence, but it’s still really cool!)

How can you not love a gal like that?

Now I realize that, for some, the mere thought of traveling to meet a person you’ve never once talked with and staying with them for two days can be unnerving. Just mentioning it to a handful of people over the past few weeks has provoked some (ahem) interesting responses…

You are staying in the home of someone you have NEVER, EVER met? What if you don’t get along? What if she snores?  What if you hate it while you’re there??

That city is FILLED with lunatic axe murderers… don’t you watch CSI?

You don’t know ANYTHING about this woman! What if she stabs you in your sleep and carves you into small pieces that can easily fit down the garbage disposal?

Don’t forget your mace – and be sure to sleep with it!

Look, I know y’all love me and I thank you for your concerns (macabre as they are), but pullleeeeeze! If you ever saw Elizabeth’s stinking-adorable face, you’d know right off the bat that she’s not an axe murderer.  She also has an equally adorable little boy who lives with her, so carving me up while he’s sleeping in the next room is not a high likelihood.

And I do know her: we’ve been Facebook friends for over a year, and share many interests and passions that include sewing, wine, Scrabble and butter pecan ice cream (the important things!). We also share the same witty, dry sense of humor. But mostly, what I know is that I already like her. That’s more than enough of a start for me, and plenty upon which to base a fun weekend.

In fact, if this turns out successfully as I know it will, I’m going to cash in a boatload of Rick’s frequent flyer miles and take off to all parts of this country, meeting other amazing people I’ve fallen in love with online.  What an awesome series of adventures that would be!

But I’m getting ahead of myself: one adventure at a time…  Next week, I’m off to the Big Apple to visit my friend Elizabeth.  No hesitation, no worries. Only giddy excitement to be seeing (and not meeting since we’ve already done that) my friend. And for those of you still unreasonably concerned, I’ll report in when I get back.

Unless, of course, I end up in the garbage disposal…

By the way, that’s a photo of Elizabeth traveling in Wales and the U.K. with Susie on a Stick.  Damn… the woman even took a version of me with her on vacation!