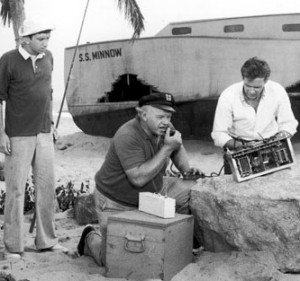 Some tale, all right.

Last weekend, I indulged myself (i.e., I wasted two days of my life) by watching a Gilligan’s Island marathon.  A head cold enticed me to camp out on the sofa in my jammies, and spending a few days with the Skipper and his Little Buddy seemed the perfect diversion. Little did I know it would lead to solving one of the most extraordinary, nagging mysteries known to mankind.

When it went off the air in 1967, Gilligan’s Island left more unanswered questions than this Spring’s Lost finale. Luckily by Sunday evening, after having watched nearly all ninety episodes, most questions had been resolved: the Professor’s real name (Roy Hinkley), how the Skipper met Gilligan (in the Navy), who the hell Horace Higgenbotham was (Mary Ann’s boyfriend), and how much money Mr. Howell had (three million dollars, more or less).

But these paltry answers only scraped the surface.  They left me deprived: I wanted to go deeper and explore the more complex riddles of Gilligan. How did that bizarre mix of people ever get together? Why did they take so much clothing with them if it was only a three-hour tour? How did that tiny ship hold seven people and all that crap? Why did the Howells bring all that money with them? If they were really stranded, why such a life of leisure? And the most perplexing of all Gilligan conundrums: if they could build all those contraptions and keep that stupid radio running for so long, why couldn’t they just fix the damned hole in the boat and leave that freakin’ island?

I watched intently, looking for answers.  And then two episodes away from the final one I bolted off the sofa, seized by a super-sized holy shit moment.  I’d solved it, this Mystery of Gilligan’s Island.  The only plausible explanation for why this unlikely group knew one another and what, precisely, they were really doing on that island.

They were dealing drugs.  Oh yes.

The devious little plot they concocted to make us all think they were deserted was bullshit.  And it was a masterful deception that I, alone – only after having dedicated over 48 hours of sleepless, astute observation to this cause – have skillfully exposed.

I know what you’re thinking, but I swear: I’ve already consulted professionals and I don’t need medication.  I shall explain…

Let’s begin with the Professor, clearly the brains of the group.  Roy’s countless hours in the science lab led me to the conclusion that he was the one who crafted the recipe.  And in addition to the many degrees he boasted, I’m guessing there was one in law as well.  That nerdy, MacGyver wannabe demeanor was a façade to hide the chemist/consigliere that he really was for this on-island drug cartel.

I believe the Professor’s impressive knowledge of botany lead to the success of their regular harvest, no doubt aided by the farming skills Mary Ann.  That’s right: her Kansas farm-girl roots were neither all-American nor coincidence.  Mary Ann’s roomie was Ginger, who contributed to their efforts by exploiting her hefty network of Hollywood who’s whos to pimp their illegal product.  Her… ahem… acting career (who can forget The Hula Girl and the Fullback) had been actively sponsored by Mr. Howell, who used his wealth to infiltrate Tinseltown’s bigwigs while secretly backing the covert operation.

Then there’s Lovey.  I admit that, initially, I doubted my theory because I could not credibly explain the presence of Lovey (real name: Eunice) and her possible role in such a devious plot.  But I realized that her presence was key to the deception that was necessary for such an operation to remain under the radar.  Her naiveté is ingenious: who’d ever suspect poor Lovey Howell and her adoring husband of anything other than silliness? It was perfect. She probably also provided an active network of clients from the country club as well…

The Skipper was the planner of the group.  His Naval background in the pacific during WWII, combined with his Minnow cruise-tour business, made it obvious to me that he (a.k.a. Jonas Grumby) was the glue that stuck this twisted team together.  He probably spotted that remote desert island years before while serving aboard a destroyer.  Never recorded on any nautical maps, the Skipper knew this was the perfect spot for harvesting vast quantities of illegal crops and (if needed) hiding out.  Decades later, he met the Howells and the Professor while providing innocent daily excursions around the Hawaiian islands. Got them together along with the others, formed the operation, and used the Minnow to smuggle the product back to the mainland.  My guess is they all ended up on the island for an extended stay after being actively chased by the DEA: this would explain the multitude of clothes (although it reveals their poor choice of island wear).  Jonas had to lead the Minnow into that storm to provide the perfect cover-up for appearing lost at sea.  Then he had to make the Minnow look as though it really couldn’t go anywhere ever again.  Why?  Read on…

One final piece remains in this annoying puzzle: Gilligan.  Stupid, clumsy, gullable yet loveable Gilligan. I’m positive he had no idea they weren’t stranded.  An accomplished charade that each of his boat mates deftly nourished to ensure that, if ever caught, Gilligan could never reveal the true nature of their lucrative activities. Gilligan would encounter seemingly unrelated and strangely coincidental guests on their island and offer them coconut cream pies (baked with love by Mary Ann for this sole purpose).  These guests, which included an exiled dictator, an airline pilot, a rock band, a Russian spy and a Hollywood movie producer (appearing in the first season alone!) would grab these tasty treats and quickly leave the island, often disappearing just as mysteriously as they arrived.  Why?  To deliver the products hidden within the intestines of those pies, my friends.  The unknowing character to deliver them?  Gilligan: the mule of this operation.

If he wasn’t the mule, Gilligan’s presence on that island can only be explained by reasons of sympathy.  His stupidity could be the result of a botched recipe the Professor permitted him to sample. Maybe he’d been taking a bit too much of whatever illegal shit they were smuggling.  In which case the coconut cream pies were for an abhorrent case of munchies.  I don’t know for certain, suffice to say that the Skipper was loyal to his little buddy (whom he once credited with saving his life) and must have wanted Gilligan involved somehow.

One remaining question that I, alas, never found the answer for: why some of them packed clothes and others didn’t.  Maybe it was a guy thing, since the Professor, Gilligan and the Skipper remained in the same outfits (I don’t include Thurston here, since Lovey no doubt packed for him).  Maybe they needed to make a quick getaway and there simply wasn’t time.  Who knows…

So there it is.  No need to thank me, really: my gratification is borne of a job well done and a perplexing mystery solved.  Now we really can all just sit right back…