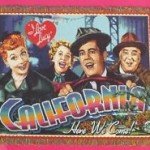 About three years ago, Rick and I decided to explore where in the world we’d be willing to live, if we could live anywhere. Primarily because it turns out we really can live just about anywhere, given both our jobs. And since we’d planned on selling our New Hampshire home in a few years’ time, it made sense not to limit ourselves to someplace local. Why the Hell not, we decided: let’s open ourselves to the possibilities!

After some homework, we whittled the list down to the Oregon coast, The Netherlands, Atlanta, and right here in our beloved New Hampshire (odd selection – they’re all so different!) It was fun stuff, doing this: we learned what we wanted and where we’d like to be.

As well as where we did not want to be.
And for me, the top spot on the I-would-never-ever-live-there list has been long held by California.

Yes, California is beautiful. Yes, the weather can’t be beat. And yes, I have clearly I fallen victim to clichés and stereotypes – because whenever I think of California, my mind sees nothing but thonged, tanned blondes with fake boobs, outrageously expensive houses, cardboard-eating masses at organic tofu restaurants, freeways packed with homicidal drivers, celebrity politicians, little kids named after fruit and one-word sentences like Dude! or Chill!

There have really been only three things I liked about California: the wine, Disneyland and that episode where Lucy and Ricky drive with Ethel and Fred out to Hollywood. That’s frickin’ it. I’ve consistently stated that I would rather drive hot, rusty spikes straight through my ears than move to California. We will NEVER live there, I’ve sternly declared to Rick on numerous occasions. Never!

You know the saying never say never? And how people who say it often end up eating their words?
Well, guess where the Hell we’re moving…

Way too fast. One night while casually chatting over dinner, Rick mentioned a few sexy job opportunities at his company in their San Diego headquarters and how they could be the key to us spending lots more time together. Then he opened that deadly third bottle of wine and softly spoke about how much he missed me while he was on the road. The next thing I knew, I was gallantly waving the I-can-work-from-anywhere flag and telling him how much his career meant to me while checking Realtor.com for the current value of our home.

And that’s how it happened: that rat-bastard husband of mine got me drunk and sweet-talked me.
Again.

Anyhow, a few hours later, I sat straight up in bed in the cold, dark night and had my first full-on panic attack. WHAT THE FUCK WAS I THINKING? I cannot POSSIBLY move to California – I don’t have any pretty sandals! I hate tofu!! I’m a fat chick with Irish Catholic, burn-and-peel skin!!! I speak in a thick Boston accent without the use of any R’s! There must be laws that prohibit people like me from living in that state: surely, the authorities will take one look, pick me up and escort me to the nearest border. Which, by the way, is fucking MEXICO! I’ll have to drive around the whole damned time I live there with my passport and change for a Tijuana payphone!!

It took nearly two weeks before I could sleep through the night without waking in a cold sweat, but I settled down a bit and tried to get used to the idea of moving to California. Mostly, I’m embarrassed to admit, by deciding that – in order to save face – I simply wouldn’t tell anyone we were moving. Except maybe my parents. And the local liquor store, who would no doubt notice my absence far sooner than most of my friends…

Then I saw how ridiculous that idea was (that’s the story I’m sticking to at least), and started telling a few people. Their immediate response was WHY??? – and since the whole thing was so new to me, I couldn’t remember. So I started asking that too. Which left us all standing around crying, just like Nancy Kerrigan right there on that skating-rink floor, holding her leg while screaming.  WWHHHYYY?? WWWWHHHHHHHHHHHYYYYYYYYYY?????????

It’s never a good idea to announce that you’re moving while you’re still panicking over moving.

This was not going to work until I started feeling better about my decision, so I tried to calm my nerves by creating a few lists:

Initially, there were lots of things to place on the MISS list: the mountain views from my office window, the delicious absence of traffic, the glorious brilliance of Fall, the abundance of wildlife in my yard and the unpretentious, relaxed easiness of a small-town life. Then there’s not paying income tax. Or sales tax. And the low cost of living. Not to mention the overall lack of natural disasters, save for an occasional Nor’easter – but at least you can see those things coming days ahead of time (it’s not like they forecast seven-pointer-quakes on the evening news)…

Surprisingly, the NOT MISS list grew even faster: black flies, frost heaves, having to drive 35 minutes to purchase anything other than milk, bait or ammunition, shoveling snow off the roof (fat girls and ladders do not make good bedfellows), a predominantly lilly-white, overwhelmingly Republican demographic, and winters so cold, long and stinking bitter that I would sometimes actually yearn for a TonTon.

Then came the CALIFORNIA list. There’s the chance to garden (can’t do much of that in our shady, zone-4 Granite State), one-floor living (our three-story chalet has been recently wearing on us), warmer seasons, and more than two bars on my cell phone. Also sidewalks, public transportation, nearby beaches, Disneyland within a 90-minute drive, a cheese selection with hopefully more range than white or yellow Land-O-Lakes, tossing out my arctic-cold boots and parkas and riding the motorcycle year-round. Maybe even (dare I dream) Democrats! This list grew shitloads longer (and quicker) than I’d ever thought.

The last item I added to the CALIFORNIA list was being able to see Rick more than eight days every month. And suddenly, I remembered why I was even considering this move.

At that moment, I stopped panicking and started packing.
So California, here I fucking come.

And give me a shout if: 1) you’d like to buy an amazing New Hampshire gambrel-chalet, 2) you happen to have a spare THIS CAR CLIMBED MOUNT WASHINGTON bumpersticker, or 3) you’d like to offer my impressively vast (and largely ineffective) collection of mosquito repellant a new home.